TWELVE ARCHES AND THE SAD SOCK

The theme which was chosen for the 6th edition of the 120 Hours international competition dedicated for students took a small shift (regarding the previous editions) and went towards: “A House Without a Function”. The proposed project starts putting in light a scene of playfullnes about the possible scenarios of origins of space and function taking in consideration, as main tools of narration, the general figure of the Architect and that of Adam (which plays the role of the first human being) as its main characters in a universal-structure that has inside of its walls, embedded - The Architecture Theory itself, using the main books of the agenda as masonry system, becoming at the end the whatever-so-called Monument of Space.

The main picture concludes after the everyday gesture of Adam takes place - giving sense to apparent nonsense because (“good good, I understand your story, but at the end of the day what is the structure for?”) of his need to put his clothes to dry. He transforms the Space in a clothes dryer. But his transformation is participative. He’s an architect itself. Is the first human being an architect as well then? All the current questions emerge also from the side-quest for the primordial dwelling archetype: The First House.

In the end, the general discourse transcends towards the the limitations of creation - limitations determined by research done in the past which is strongly embedded in the architectural education (palimpsest of thoughts) of which each of us is strongly indoctrinated and cannot just reset a way of thinking.

Is our space (just) a collage of needs? 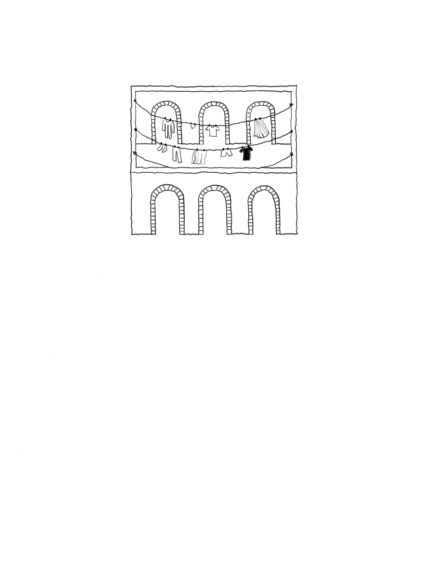